We have developed the marine biodegradable bio-composite plastic material “BiofadeTM” with the aim of solving the world’s marine plastic waste problem.

What is “biodegradable plastic”?

Many common plastics, such as polyethylene and polypropylene, do not biodegrade, but some few types of polyester resins biodegrade. These biodegradable plastics decompose under conditions such as water and enzymes produced by microorganisms. This is called the first stage hydrolysis. The plastic, which is then shortened by hydrolysis, is eaten by, for example, bacterial microorganisms that live in the soil or water, and is decomposed into water and carbon dioxide, after which nothing is left. This is the second stage of biodegradation.
Biodegradable plastics are eventually completely decomposed by bacteria, but they are safer because they are microplastics for a relatively short period of time. Also, if there is biomass such as wood flour or starch together, it will eventually be decomposed by bacteria as well. By making good use of these, for example, in soil, lake water, or seawater, it is possible to make plastic materials that biodegrade without making microplastics. 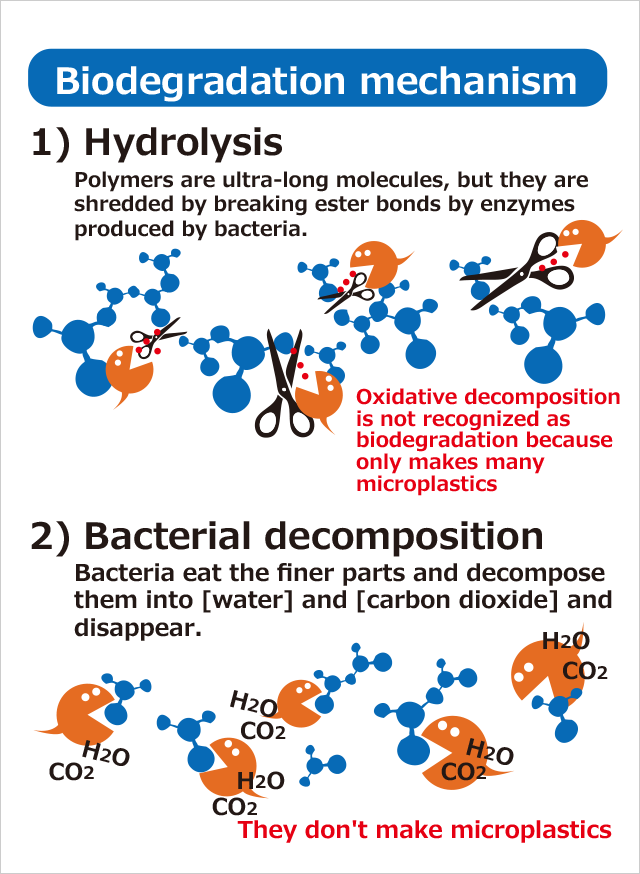 There are various types of “biodegradable plastics” 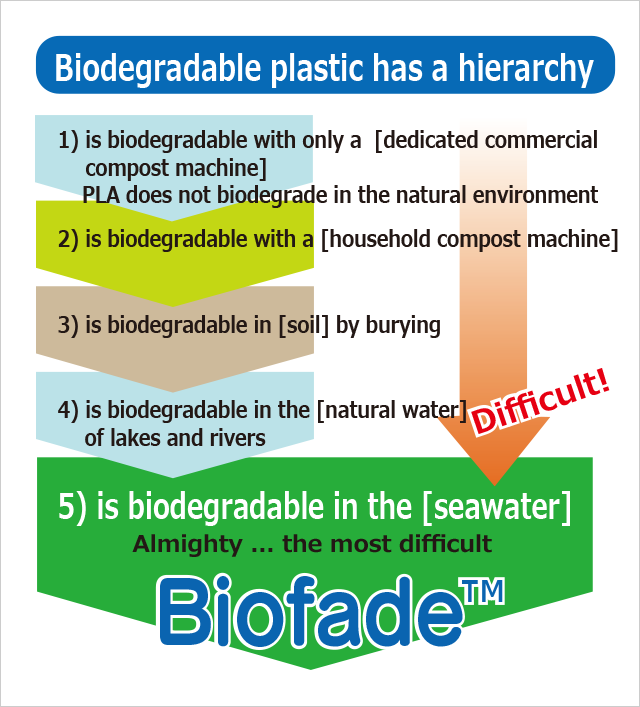 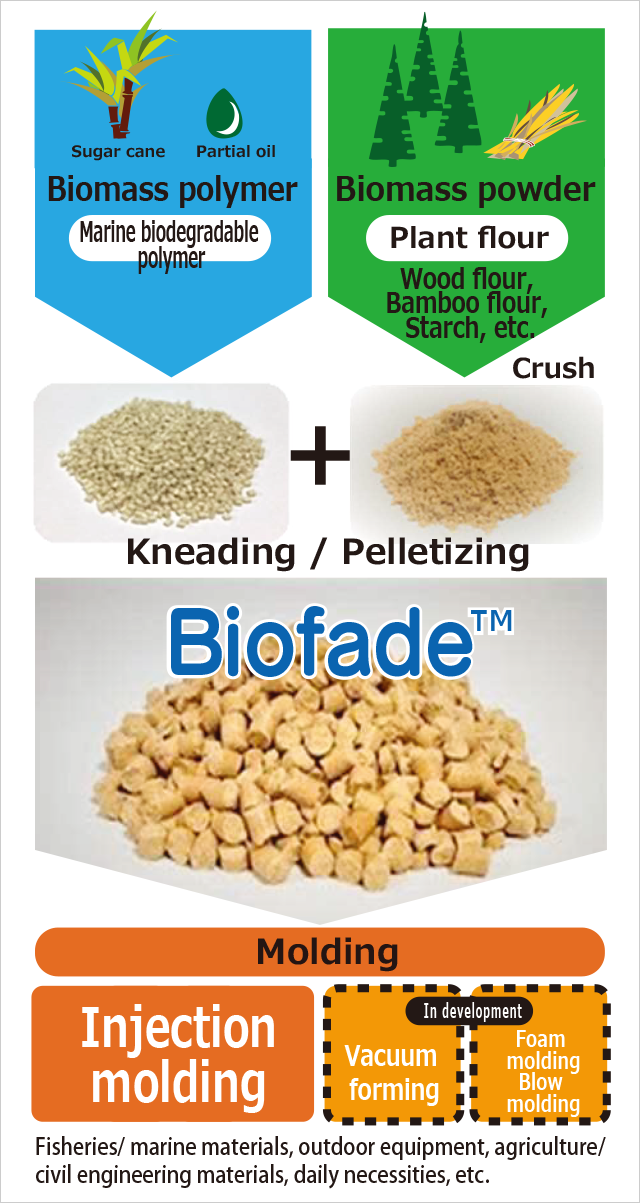 What are the features of “Biofade”?

The test to confirm the biodegradability in seawater (modified method of ASTM D6691) was carried out by the “Chemicals Evaluation and Research Institute, Japan(CERI)”, which has abundant experience in biodegradability testing. Specifically, the degree of biodegradation is evaluated by putting plastic powder in seawater and measuring the amount of oxygen consumed when the plastic is biodegraded.

As a result, with the 40% wood flour additive, the average biodegradation degree was 36% after 28 days. Lignin, which is a component of wood flour, is biodegraded with a slight delay, so it is thought that the degree of biodegradation will increase if more time is taken. It can be said that it is a material that biodegrades sufficiently in seawater.

In addition, although it is not evaluated side by side and it can not be said that it is superior or inferior only during this period, the published value of PHBH, which is very famous for marine biodegradable plastic, was 23% biodegradation under the same conditions. So, looking only at the numbers, the result was about 13% better. 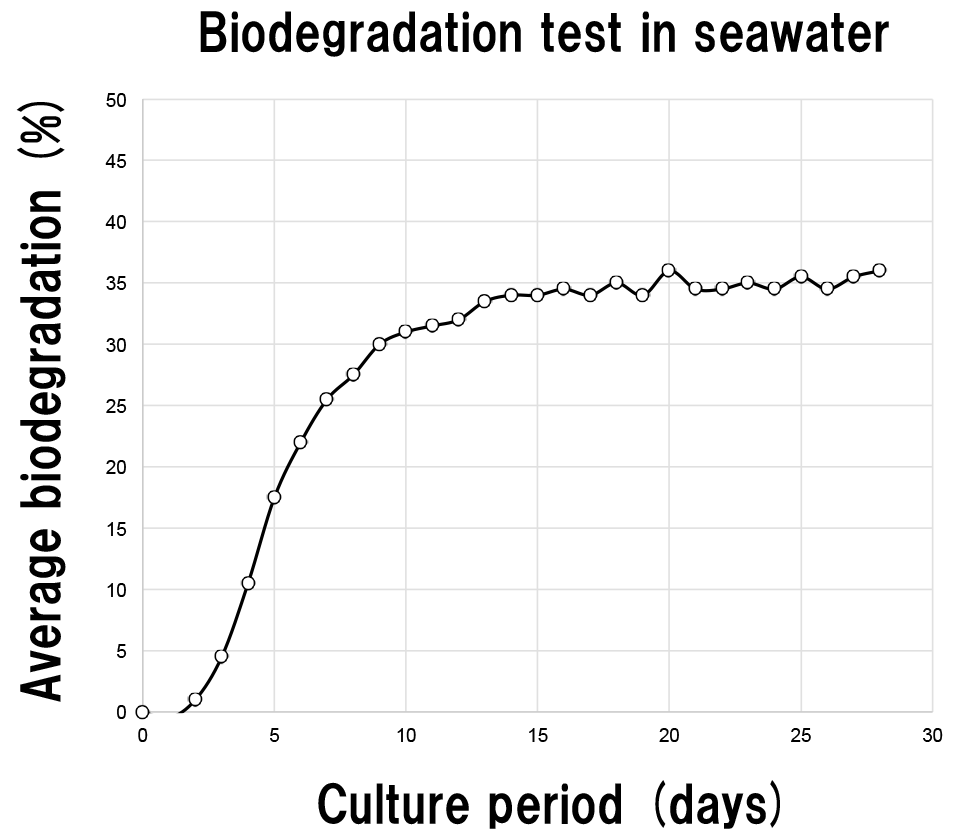 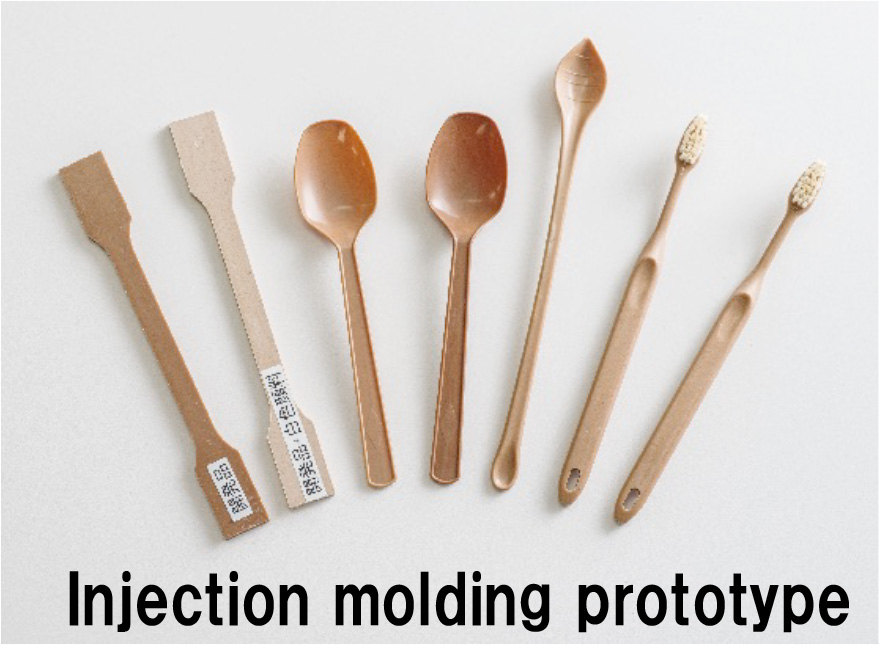 Biomass composite plastic can be injection molded, so it can be made in various shapes. Even if it is blown away by the wind and enters a river and flows into the sea, it will not become plastic waste in the sea as it will eventually be cleaned by bacteria over time.

This type of plastic is a crystalline resin, but it is necessary for molding that it is easy to crystallize, that is, it hardens quickly when cooled from a high molding temperature. As a result of examining the crystallization behavior by DSC measurement, it was found that the crystallization was pretty fast. The photo above is an example of a spoon or toothbrush made by injection molding.

I had an idea to make such a product, how about this usage, please feel free to contact us. It would be great if it could be widely used and the “sea plastic waste problem” could be improved as much as possible. 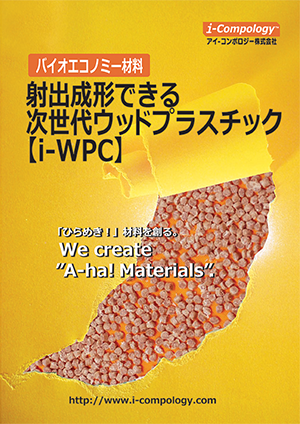 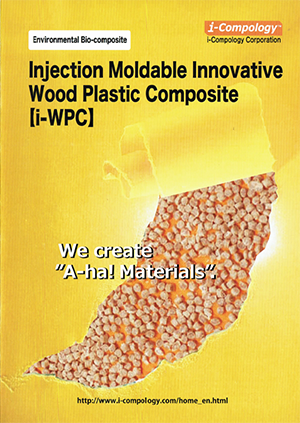